Forget about those expensive trips to Naples or the overcrowded Trattoria around the corner – with the Veganz Pizza Tricolore you can have la dolce vita in the twinkling of an eye! Crispy thin crust, creamy pizza melter and a tangy-aromatic tomato sauce. Our topping speciale: Finely chopped basil and a delicious white sauce with all-natural ingredients. Hand topped and pre-baked on a wood burning stove. As you can see, this vegan pizza is molto bellissima! 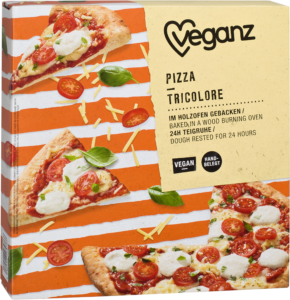 The Veganz Pizza Tricolore brings you Italian flair as well as transparency into your daily life. Okay, you’re still with me when it comes to that Bella-Italia-Feeling, but the thing with transparency is still a mystery? Then read the following explanation: Our vegan pizza displays a Sustainability Score on its packaging and, as you can see on the image, this score is broken down into four categories: CO2 emissions, water footprint, animal welfare and rainforest conservation. This way you can clearly see just how sustainable our Tricolore is. We also make it super easy for you to choose a pizza that’s not only vegan and delicious but gets points for being environmentally friendly.
Why are we doing this? Transparency and environmental protection are very important to us: You get all the facts and while at the same time giving us the chance to make our products more sustainable.

Yes, life is sweet! Especially when our delicious products protect all living beings and don’t harm the rain forest or the climate. And our Tricolore is very good at this protection. As you can see, our vegan pizza gets best marks for animal welfare and climate. That’s because we work exclusively with vegan raw materials, which means that instead of cow’s milk cheese we use a plant based cheese made with coconut oil. The emissions value of the Veganz Pizza Tricolore is 608 grams whereas a non-vegan mozzarella pizza 1.276 grams – that’s more than double! What we also think is molto bene? Our pizza protects the wonderful rainforest since we don’t use palm oil or soy in our ingredients.

What about the Water? Uno, due…

We didn’t quite reach a numero tre star in regard to water footprint. We can assure you, however, that Veganz Pizza Tricolore with its two stars actually contributes to the reduction of the world’s water footprint since the ingredients and production are not very water intensive – barring one single exception, an exception that comes from Spain and bears the name ‘olive oil’. Although only a small drop of it gets into the dough, 4,280 litres of the scarce liquid are needed to produce one litre of olive oil.
What can we do? The water footprint for Italian olive oil is almost twice as good as the Spanish oil.  Simply put: If we could get our oil from Italy, we would get three stars with the water. Wanna know something? We’re working on it! How, when and where still remains to be seen, but we’ll keep you posted. Until then: Have patience and eat vegan pizza. 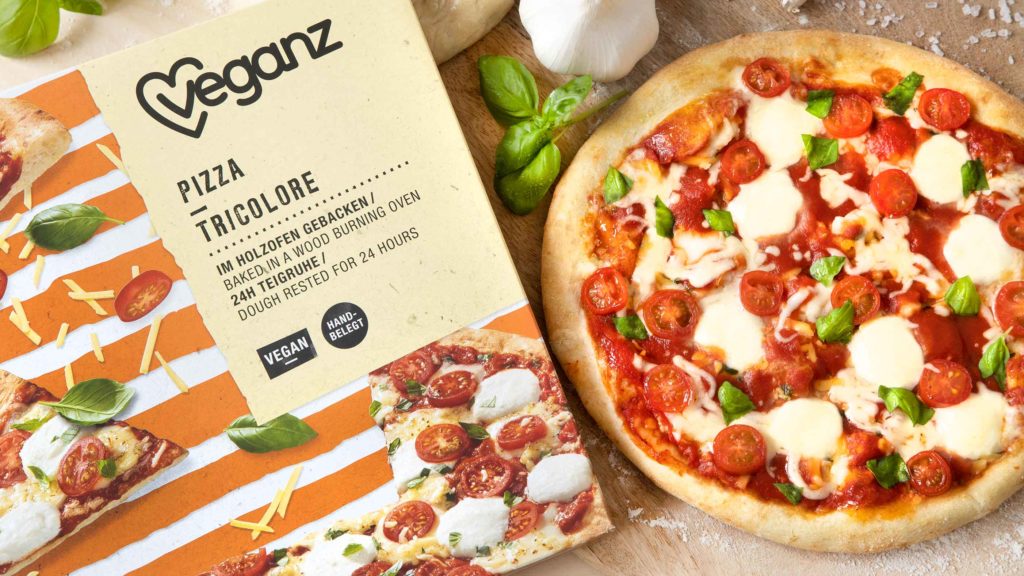 Except for the spices, all ingredients of the Veganz Pizza Tricolore come from Europe e.g. Germany, Spain and of course Bella Italia!

As if Mama Siziliana Topped it herself

Even though we’re talking about vegan pizza, Italian Tradition is written in capital letters all over the preparation: We make the dough without any artificial baking agents and instead use yeast, refined with a little extra virgin olive oil and sea salt. After a 24-hour resting period, the crust is pre-baked in a word burning stove atop Sicilian Aetna lava stone – making it beautifully crispy, fluffy and light, all at the same time.  Afterwards, the Veganz Pizza Tricolore is topped by hand: Tangy tomato sauce, sun dried cherry tomatoes and hearty Sicilian highland herbs. Mmhhh… Deliziosa!

Say Arrivederci to all those other Vegan Pizzas

Our Veganz Tricolore has what a lot of other vegan frozen pizzas don’t: A creamy pizza melter made with coconut oil and yummy white sauce puffs! Visually they look like mozzarella but offer a whole lot more taste-wise. The vegan pizza gets its special spicy taste through the pleasant hint of garlic. The trick? Creamy white sauce sprinkles made with natural ingredients and 50% cauliflower.

Si, but that’s no big deal. The additives are only used in the pizza melter so that it looks like ‘real’ cheese, adding beta-carotene as a colourant – because, as we all know, the eyes eat too.  We use modified starch so that the individual pizza melter components stick together and a few so-called ‘acidity regulators’ that are required for pH balance. These are there so that the pizza melter doesn’t form any lumps and remains stable while keeping its colour.

Before we tell you how to prepare the vegan pizza, first things first: Our vegan pizza is made for topping to your own Gutso with other ingredients. Whether rucola, peppers or a vegan meat substitute – your creativity shall know no bounds! 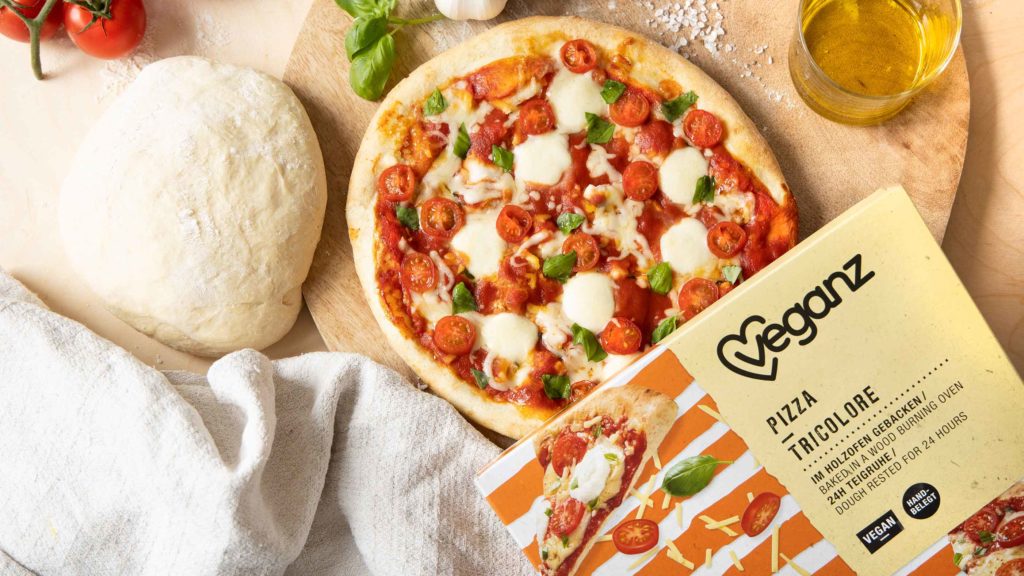 Is There Still a Little sostenibilità for the Packaging?

In case you don’t happen to have a dictionary handy: Sostenibilità is Italian for sustainability. And yes, in relation to our packaging, we definitely see room for improvement – which is not quite so simple. Our Veganz Pizza Tricolore is relegated to the frozen foods section, which means we have to fulfil current hygiene and protection regulations as well as the necessary transport safety precautions – no comparison to your favourite pizzeria around the corner!
And so, the packaging of our Pizza Tricolore is made up of two components: A plastic film and a cardboard folding box. The former is made of polyethylene, also known as LDPE, necessary so that the ingredients don’t bounce around wildly in the box or even fly out. The film also protects our vegan pizza from bacteria and other external influences. Luckily, LDPE has a good eco-balance and is completely recyclable. The folding cardboard box is made from 86 % recycled paper and is recyclable as well. Mineral oil in the ink? No way! You’ll never, ever find that on our packaging! As you can see: Plastic packaging is often unavoidable, which makes it difficult for us to find a more optimal solution. But yes, as a vegan and sustainable brand we feel an absolute obligation to look for more environmentally friendly alternatives – after all, ingredients and packaging go hand in hand. We are not perfect, but we are always keeping our eyes and ears open. 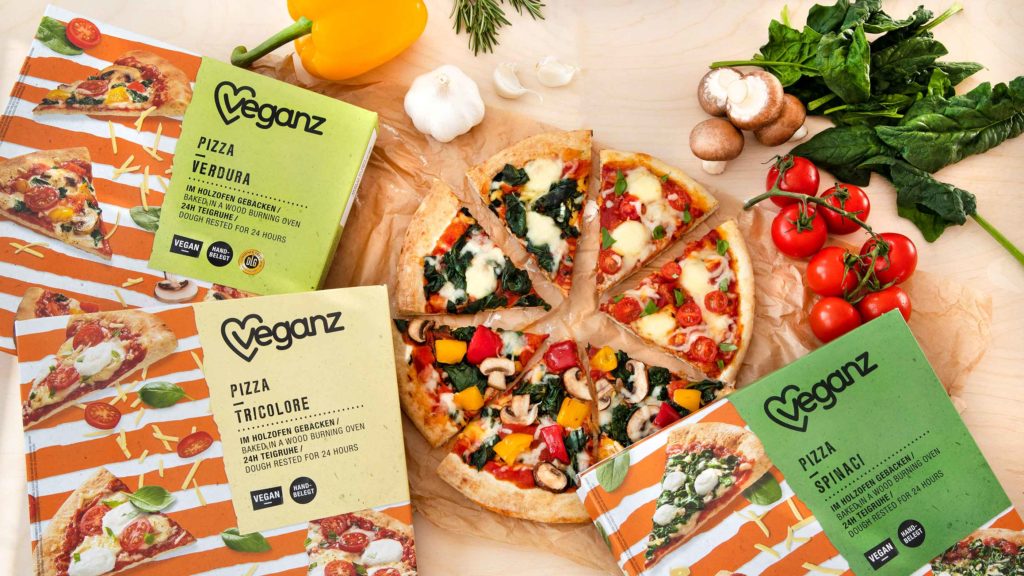